Bangkok: With the semi-finalists for the AFC U23 Championship Thailand 2020 decided, the four remaining teams are one win away from sealing a place at the Tokyo 2020 Olympics and two away from lifting the coveted title.

Three of the four teams will earn tickets to Tokyo 2020 with Uzbekistan the most impressive side in the quarter-finals, with the defending champions coming from behind to storm past a strong United Arab Emirates 5-1 in their last eight tie.

Australia needed extra time to see off Bahrain, with substitute Al Hassan Toure scoring in the 101st minute to take the Olyroos through. the-AFC.com takes a look at what awaits in Wednesday’s semi-finals.

Uzbekistan will be aiming to become the first two-time winners of the AFC U23 Championship, having defeated Vietnam 2-1 to lift the 2018 title. Previous champions were Japan (2016) and Iraq (2013/14), who both did not progress past the group stage in Thailand 2020.

Korea Republic are the only team to have made the semi-finals of all four editions of the AFC U23 Championship, finishing runners-up in 2016 and fourth in the other two editions. Kim Hak-bum’s side will be determined to finally lift the trophy.

Australia are in their first AFC U23 Championship semi-finals, having lost in the quarter-finals of the inaugural edition and exited in the group stage in 2016 and 2018.

Saudi Arabia are in the semi-finals for the first time in three editions, having suffered group stage exits in 2016 and 2018. They were, however, finalists in 2013/14 and will be looking to add the Thailand 2020 title to the AFC U-19 Championship crown won last year.

Korea Republic are the only team among the semi-finalists with a perfect record of four wins. Australia advanced from Group A with one win and two draws before defeating Bahrain in the quarter-finals.

Saudi Arabia’s 1-0 win over Thailand in the quarter-finals followed two victories and a draw in Group B, while Uzbekistan are the only semi-finalists to have suffered a defeat in the tournament – losing 2-1 to Korea Republic in Group C.

Uzbekistan’s Islomjon Kobilov will head into the semi-final leading the race for the Top Scorer Award with three goals to his name.

Australia’s Nicholas D’Agostino and Korea Republic duo Cho Gue-sung and Lee Dong-jun are on two each while Saudi Arabia’s four goals thus far have been scored by four different players. 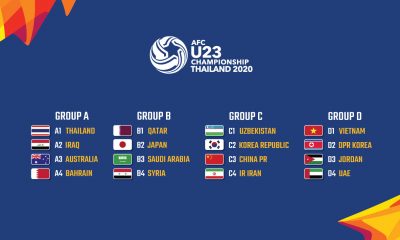