Việt Nam will treat the U15 Football Tournament, Tiền Phong Plastics Cup, in Đà Nẵng next week as a warm-up event for their upcoming… 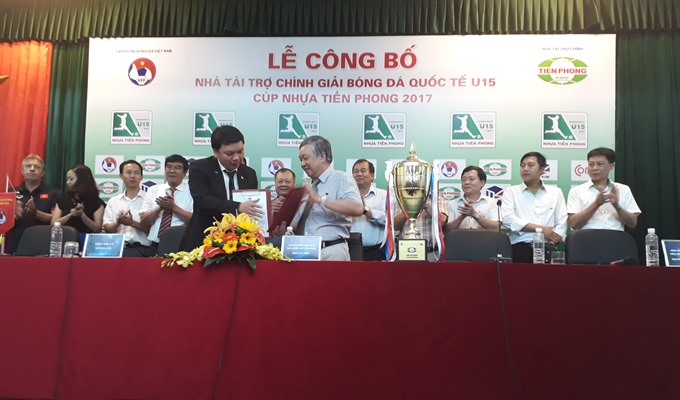 VFF General Secretary Lê Hoài Anh (left) and Trần Bá Phúc, chairman of the board of directors of Tiền Phong Plastics Company at the sponsorship signing ceremony for the international U15 tournament in Đà Nẵng.

Players are gathering and training in Hà Nội under coach Vũ Hồng Việt, who is confident in his debut as a head coach of the national squad.

Việt believes his plan could help players overcome challenges during the ASEAN U15 Football Championship in Thailand in July and the Asian U16 qualifier in September in Mongolia.

“After a week of training, my players are showing better skills and tactics. Some have good potential, such as striker Nguyên Hoàng, midfielders Thế Hùng and Văn Khang,” Việt said.

“The team is strictly following our tactics of combining in small space, good ball management and attacking style.”

Việt and his players will train in Hà Nội until June 9. They will then move to Đà Nẵng for the four-side tournament, which will begin five days later.

Việt Nam will first play Chinese Taipei on June 14. In a later match, Myanmar will face Indonesia at the Xuân Hòa Stadium.

The four squads will play in the round-robin format until June 18. The team with the highest points will be the champion and receive US$3,000 bonus in cash.

The event is, according to Việt, a good test for his players prior to the regional and Asian events. Their mistakes and weaknesses can be determined and their skills improved, so that they will be ready to perform, he said.

“The U15s have two important tasks this year, competing at the regional U15 and Asian U16 qualifier. The Tiền Phong Plastics Cup is a chance for them to practise and gain more experience for these international events,” VFF General Secretary Lê Hoài Anh said.

Last year, Việt Nam advanced to the quarter-finals of the Asian tournament. They lost 0-5 to Iran and failed to take part in this year U17 World Cup in India this year.

Việt Nam Football Federation Vice President Trần Quốc Tuấn said, “To be a World Cup participant (like in the U20s last month) the U15s must be a regular team at the finals of the Asian championship. We will face stronger rivals there, which will help us raise our level. I hope that the success of their senior team will give them the confidence to face difficulties, the first one will be in the Đà Nẵng competition.”