Việt Nam comfortably defeated Indonesia 3-1 in their 2022 World Cup qualifier yesterday in Bali in their latest step on the road to Qatar. 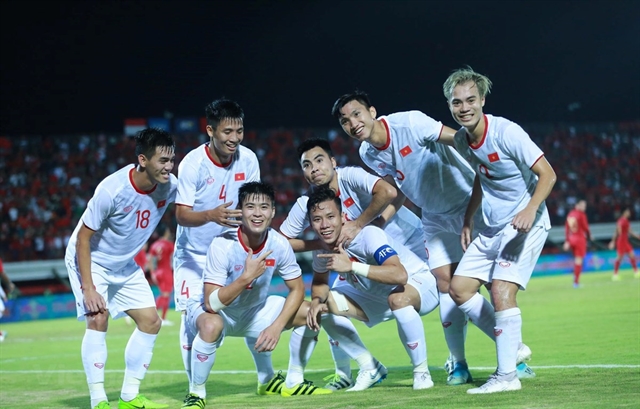 The result leaves the Vietnamese side joint top of their second round group on seven points, with Thailand’s stunning 2-1 upset over favourites the United Arab Emirates (UAE) the same night blowing Group G wide open.

The away side dominated much of the early going without creating many clear opportunities, with the poor pitch at the Kapten I Wayan Dipta Stadium clearly taking some getting used to.

As the half wore on Hà Nội FC star Nguyễn Quang Hải began to exert his influence on the game, and the left-footed magician was instrumental in the opening goal.

After great work from Đỗ Hùng Dũng down the right side won a corner, Hải’s delivery was flicked on by forward Nguyễn Tiến Linh, headed back across goal by defender Đoàn Văn Hậu and then bundled in by Đỗ Duy Mạnh.

The half ended 1-0, though the away side spurned two glorious opportunities to extend their lead, with Hải and Linh fluffing their lines.

No matter, as a five-minute spell in the second period put the game to bed.

In the 53rd minute, Dũng skipped through the defence and won a penalty, which captain Quế Ngọc Hải cooly slotted home.

Six minutes later, Linh latched onto a delightful through ball from Nguyễn Trọng Hoàng and blasted high into the net to make it 3-0.

Việt Nam took their foot off the gas after that and Indonesia eventually replied through Irfan Bachdim, who scrambled the ball past goalkeeper Đặng Văn Lâm in the 84th minute.

There was time left for a second penalty for the visitors, as Hải was hacked down in the box, however the otherwise faultless Dũng’s weak effort was easily saved seconds before the final whistle.

The result leaves coach Park Hang-seo’s men in good shape in Group H, with seven points from a possible nine, while Indonesia are rooted to the bottom of the table on zero.

Việt Nam are next in action on November 14 at home to the UAE.