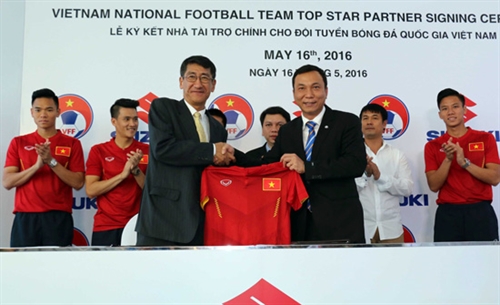 Việt Nam Football Federation General Secretary Lê Hoài Anh said the sponsorship would administer a strong push to the teams as they would receive the best conditions to prepare for their different tournaments in the future.

This year, the men’s team will compete in the last qualification round of the 2019 Asian Cup, the ASEAN Football Federation (AFF) Suzuki Cup. The women’s squad will take part in the ASEAN Championship. The U-23 men’s side will participate in the Southeast Asian Games in 2017 and the qualifier of the 2018 Asian U-23 Championship.

Apart from supporting nutrition regime and training programmes Suzuki is expected to present a bonus for the national men’s team which will compete at the AFF Suzuki Cup in November in Myanmar and the Philippines.