Bangkok: The opening ceremony of the AFC U23 Championship Thailand 2020 caught the imagination of fans across the Continent on Wednesday with organisers presenting breath-taking performances to welcome Asia’s top 16 sides just moments before the curtain raiser between the hosts, Thailand and Bahrain at the Rajamangala Stadium.

Widely regarded as the ultimate stage for Asia’s rising stars, the tournament kicked off in style as performers greeted the players and teams in the nine languages represented at the tournament with four giant fabric banners showcasing the warmth and hospitality of the host nation.

The 32-match tournament, which is being held in Southeast Asia for the first time, also featured a riveting cultural performance by over 200 performers and was graced by some of Thailand’s most beloved vocal and musical talents – the Thammasat University Symphony Orchestra, Bangkok Voices as well as local celebrity, Tachaya “Keng” Pathumwan.
The action-packed seven-minute ceremony presented spectators and TV audiences with a dazzling celebration of the Thai culture as well as the undeniable talent of Asia’s future stars. 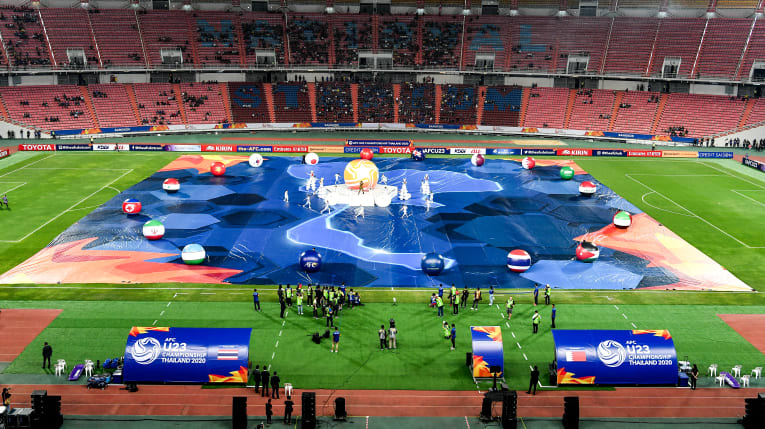 Adding to the anticipation and excitement, the opening scenes at the iconic Rajamangala Stadium were set alight by an eye-catching multi-coloured pyrotechnic display, much to the delight of the home support.

True to the ceremony’s theme: “Together as One,” the festivities drew to a close with the introduction of 16 inflatable balls, each representing the participating teams, orbiting around the tournament’s official logo, delivering the powerful message of unity through football.

In addition to continental glory, the 24-day festival of football between the top 16 U23 Asian sides across three Thai cities – Bangkok, Buriram and Songkhla – will also serve as the Qualifiers to confirm Asia’s three representatives at the 2020 Tokyo Olympic Games. Japan have already qualified as hosts.