Bangkok: Mohammed Qasim struck with a long range beauty to cancel out Reno Piscopo’s equally stunning free-kick as Iraq and Australia settled for a 1-1 draw in their opening AFC U23 Championship Thailand 2020 Group A match at the Thammasat Stadium on Wednesday.

Qasim had only been on the field eight minutes before earning Abdulghani Shahad’s side a point having seen Piscopo give the Olyroos the lead with a high quality strike into the top corner of Ali Khadim’s goal.

Piscopo, who had been a threat throughout his 64 minutes on the field, put Australia ahead just two minutes before he was replaced by Zachary Duncan when he arrowed his free-kick from 25 yards beyond the outstretched hands of Khadim.

That goal was no less than the Australians deserved after dominating the second half until that point, with Iraq having offered little after an even first half.

A moment’s silence was held prior to kick off in memory of those affected by the fires in Australia and, as the game developed, it was Graham Arnold’s side who had the first sight of goal.

With eight minutes on the clock, Piscopo attempted to curl his free-kick inside the left post of Khadim’s goal while at the other end Sadeq Zamil squandered a gilt-edged chance when, with time to pick his spot, he headed Hussein Jabbar’s corner well wide. 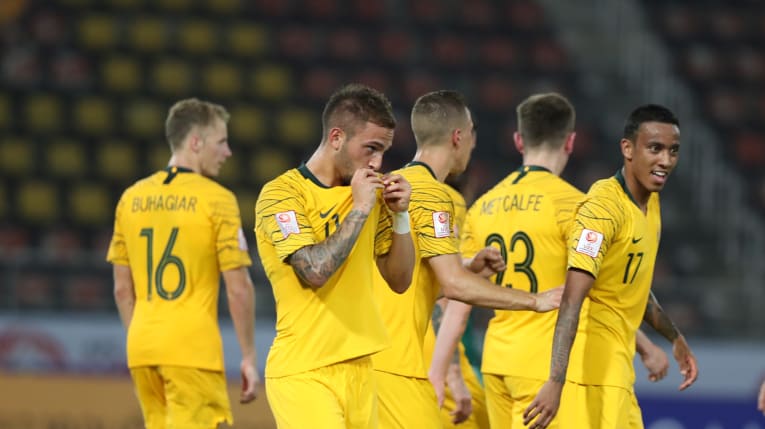 Piscopo was in the thick of the action for the Australians throughout much of the opening 45 minutes, shooting straight at Khadim from distance before later rolling the ball across the face of the Iraqi goal to leave his teammates frustrated.

But, after Piscopo put his side in front in the 62nd minute, the Australians’ advantage was to last just 15 minutes as Qasim pounced from 20 yards out, brushing aside Keanu Baccus before hitting a low shot that beat Thomas Glover via the inside of his left post.

Glover managed to put a hand on the ball to push it wide minutes later when Jabbar tried his luck from distance, while Dylan Ryan’s glancing header at the other end three minutes from time hit the post leaving both teams to share the points.

Iraq play Bahrain next on Saturday while Australia will face hosts Thailand on the same day.