Chonburi: Vietnam made an ideal start to their AFC U-19 Women’s Championship Thailand 2019 Group A campaign on Sunday as a second-half penalty from…

The hard-fought victory saw Vietnam go second in the Group A standings following DPR Korea’s comprehensive 5-1 defeat of Australia earlier in the day.

On a decidedly damp night at the Chonburi Stadium, Thailand started brightly but it was to be their opponents who fashioned the game’s first opportunity, Ngo Thi Hong Nhung unleashing a fierce angled drive which brought a fine save out of Thailand goalkeeper Ponpimon Ngoenphon on six minutes.

Thailand replied through a Ploychompoo Somnonk attempt from distance that Nguyen Thi Loan did well to repel, before the Vietnamese custodian scrambled Tipkritta Onsami’s 28th minute shot from distance around the post.

With Thailand continuing to dictate the game’s tempo, Nutwadee Pram-nak then rattled an upright on the half-hour mark and, in the first period’s last genuine goalmouth action, Ploychompoo saw another strike smartly turned away by the impressive Thi Loan.

Thailand were to be denied by the woodwork for a second time two minutes after the restart, this time Chatchawan Rodthong hitting the frame of the Vietnamese goal with Thi Loan beaten.

Vietnam refused to buckle however, and they duly went ahead on 58 minutes, Tuyet Ngan picking herself up to score from the spot after being upended in the area by the onrushing Ponpimon.

Clearly rocked by Vietnam’s opener, Thailand pushed for an equaliser but resolute defending kept them at bay until livewire forward Nadia Jehda broke free only to see her 76th minute shot from 12 yards gratefully gathered by Thi Loan.

Vietnam could, and very possibly should, have doubled their advantage moments later, but Nguyen Thi Hoa could only fire tamely into Ponpimon’s arms when through on goal.

Despite substitute Nguyen Thi Truc Huong squandering another opportunity to make it two for Vietnam late on, Van Su was on hand in the second minute of added time to fire home past Ponpimon and secure all three points for Ijiri Akira’s charges.

Vietnam will now look to make it two wins from two when they face DPR Korea on Wednesday, the same day as Thailand meeting Australia in a game both sides can ill afford to lose.

“Of course, we are far from happy with the result, but we have to remember that there are still two group stage matches to play and that we must move forward quickly and focus on those games. We lacked a cutting edge in front of goal against Vietnam and that is something that we need to remedy before we face Australia in our next game.”

“We are one of the lowest ranked teams here in Chonburi, but ahead of this match against Thailand I really was hoping that we could achieve a positive result. Our players have not had much experience in this type of tournament and you could see that in the first half. However, at the break I told them that they had simply been warming up and that they could play much better and, in the process, get a positive result. I must congratulate my players for their performances today.” 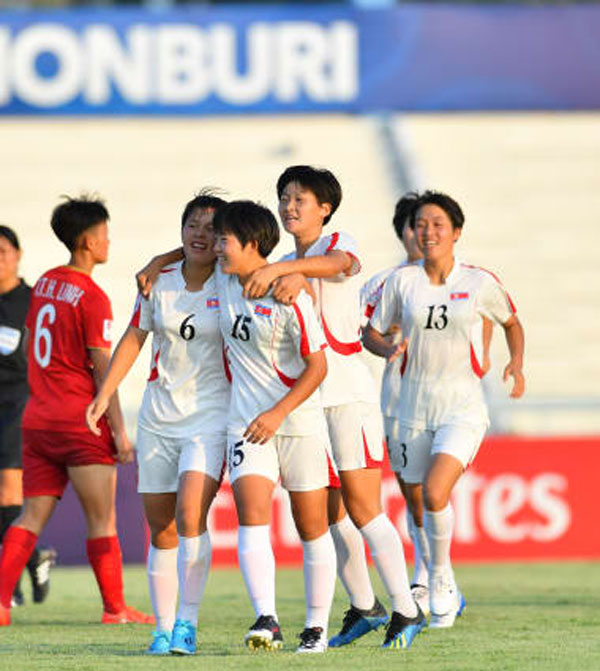