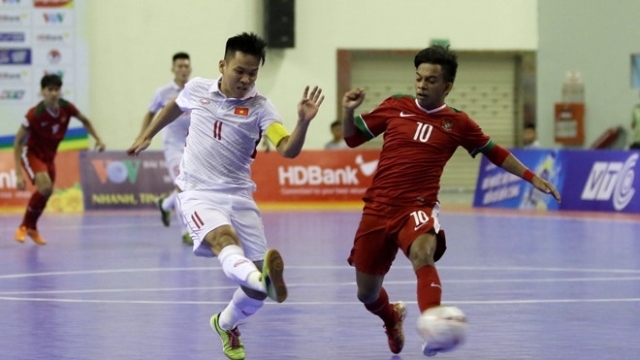 Vietnam earned a demolishing 24-0 win against the Philippines in their campaign’s opener yesterday. If they maintain the trajectory to beat Indonesia – the direct competitors to the ticket to semifinals – tonight, the hosts would have opportunities to win the top spot in Group A and could avoid the powerhouse which is Thailand in the next round. At the 29th SEA Games, Coach Miguel Rodrigo’s players defeated Indonesia 4-1.

However, in their second game at this year’s event, things were not so easy for Vietnam as Indonesia earned two wins in their last two matches against the Philippines and Brunei, scoring a total of 30 goals without conceding any goals.

In the clash this evening, Vietnam had an early opener in the 8th minute thanks to Phung Trong Luan’s volley. Inspired by the goal the hosts strengthened their attacks but Indonesia played solid and made good use of opportunities to level the scoring in the 12th minute thanks to Nawawi’s skillful finish. The 1-1 tie was maintained after the first 20 minutes.

Twelve minutes into the second half, Trong Luan put Vietnam ahead after a quick finish from a corner kick. However, the 2-1 lead of the home team only lasted for exactly two minutes. After a series of consecutive finishes, Adriansyan helped the visitors level the score.

Vietnam strengthened efforts in the last minutes and created a thrilling show only in the last three minutes of the game. Phung Trong Luan completed his hat-trick in the 37th minute, equalising3-3 for the home team. When only 32 seconds remained, Trong Luan delivered the ball crossing the Indonesian goal to Minh Tri. The latter striker did not miss the opportunity to score a “golden goal” to help Vietnam earn a dramatic 4-3 win.

The win helps Vietnam climb to the top of Group A with 6 points, on par with Indonesia but only by playing two matches. In the early match of Group A tonight, Myanmar trounced the Philippines 25-0. On October 26, the latter beat Brunei 13-0 and now also have 6 points after two wins.

Vietnam will next play Brunei on Sunday, before playing against Myanmar a day later.