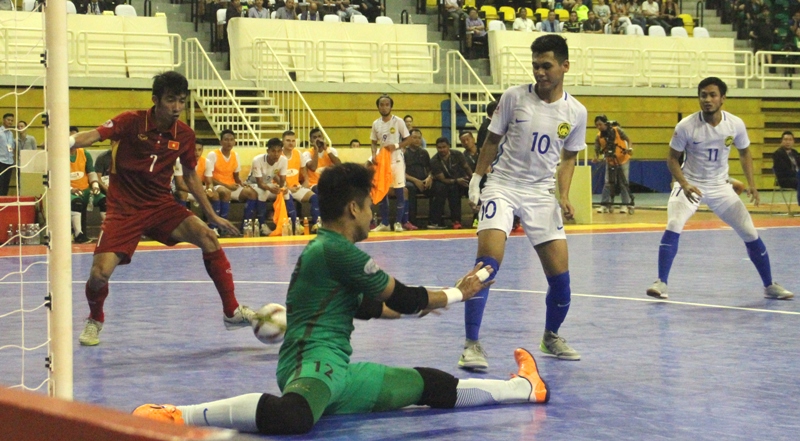 With the Thais having crushed Myanmar 8-3 earlier, there were expectations that Vietnam will have little trouble playing at home in front of a full crowd.

But that was not to be as Malaysia sprang a surprise on an out-of-sort Vietnam side to race to a 4-0 lead at the half before wrapping things up in match that saw three red cards after the break.

“It was a high risk game against Vietnam and I was not about to tell my boys to just sit back and defend,” said Malaysian head coach Chiew Chun Yong.

“Vietnam are a strong team and I respect the coach a lot. But my boys played well today. They even surprised me.

“I threw the players a challenge to perform or else there will be pain to pay when we get home. And they delivered.”

The gamble to opt for reserve keeper Azrul Hadee Taufiq seem to have paid handsomely when the latter made a string of saves to deny the Vietnam frontline which is becoming increasingly under pressure having to perform in front of an expectant crowd.

It did not take Malaysia long to smell blood and just ten minutes in, Mohd Khairul Effendy blasted in a freekick after Vietnam keeper Nguyen Wan Huy was faulted for holding on to the ball to long.

Two minutes later and Malaysia were 2-0 up with Mohd Khairul’s solo effort while two quick goals in the 14th and 15th minute through Mohamad Awaluddin Nawi and Akmarulnizam Mohd Idris ensured them a healthy 4-0 lead.

Increasingly under pressure, Vietnam started the second half with Tran Van Vu on power play as they looked to close the game and just six minutes in, temper flared which saw Malaysia’s Abu Haniffa Hasan being shown the red card for a kick on Pham Duc Hoa.

But despite having to play against ten-men Malaysia for the next two minutes, Vietnam still could not find the back of the net.

A momentary lapse of reason in the 28th minute saw Van Vu saw him picking up his second yellow card of the game when he was deemed to have held on to the ball for far too long while five minutes, Vietnam were again punished when VU Quoc Hung was shown the exit.

Malaysia then added their fifth goal of the game in the 35th minute through Syed Aizad Daniel as Vietnam then finally scored through Ngo Ngoc Son.

But that goal came a little too late as Malaysia stuck their ground to book their first final in seven years.

“What game? We did not play today. The players mind were in another planet,” said Vietnam head coach Miguel Rodrigo.

“We felt the responsibility too much. Scared? Afraid? Tired. Maybe a mixture of all things. And the consequence was the worse game we played in this tournament.

“If we had played like this in the group stage and with due respect to the Philippines, they would have beaten us.”