Việt Nam need to improve as Malaysia are stronger

National football coach Park Hang-seo believes Malaysia have improved greatly recently, and his team need luck on their side when the two teams meet in… 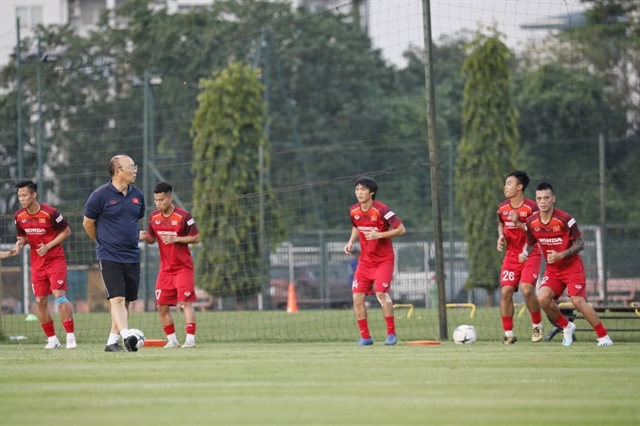 Việt Nam will host Malaysia in the second match of the qualifying round on October 10 in Hà Nội.

The hosts have one point after their opening game draw with Thailand this month and sit fourth from five teams of Group G. Malaysia are one step above with one win and one loss.

It will be the first meeting of the two sides since Việt Nam beat Malaysia 3-2 in the final of the AFF Cup last December.

Park and his assistants watched Malaysian’s recent games and all agree they were stronger now than before.

“My assistant Lee Young-jin came to see their match against the UAE last month and I myself watch a clip of that match,” said Park through an interpreter.

“I saw some changes in the team and recognised their front line is really sharp, much more than in the AFF Cup.”

The South Korean believes playing against Malaysia would not be easy.

“They have also watched us a lot, learned our strong points and found ways to limit us,” he added.

“It is impossible to change all of our tactics now but we should level up our ‘weapons’ that they already know and this change would push them in disorder (during the game).

“At the same time, we will find the Malaysian weak points and attack on that. Currently, we are discussing our tactics.”

Hà Nội FC’s six players are also absent as they are preparing for the AFC Cup’s inter-zonal final against April 25 Sports Club of North Korea on September 25.

The team will have about two weeks training so Park could select his best eleven for the match.

Tan kept most players from their last games against Indonesia and the UAE. He axed midfielder Hadin Azman and brought in defender Aidil Zafuan of Johor Darul Ta’zim and midfielder Abdul Halim Saari of Selangor.

Zafuan, 32, is a veteran player who played in many AFF Cup games in the past. He has competed 80 times for the national team. Meanwhile, it is the second time 24-year-old Saari has been called up after impressing in the domestic league.

The Malaysians will begin training on September 30. They will have a friendly against Sri Lanka at the Bukit Jalil Stadium on October 5 before leaving for Hà Nội.

The 51-year-old said Việt Nam had the same players from the AFF Cup win. They were confident and more experienced after finished in top eight at the recent Asian Cup. But Malaysia were focused and ready for the meet despite playing away from home.

“We want three points. Malaysia set a further target to enter third qualification round of the 2022 World Cup,” Tan was quoted as saying on vietnamnet.vn.

“After a defeat to the UAE we are not allowed to lose again because it would affect our players’ mentality and if we suffer another loss. Malaysia have prepared for this match and we would do all we can for a win in Hà Nội,” he said.