FLC Thanh Hóa, the runners-up of the national V.League, will represent Việt Nam at the Asian Football Confederation Champions League 2018. 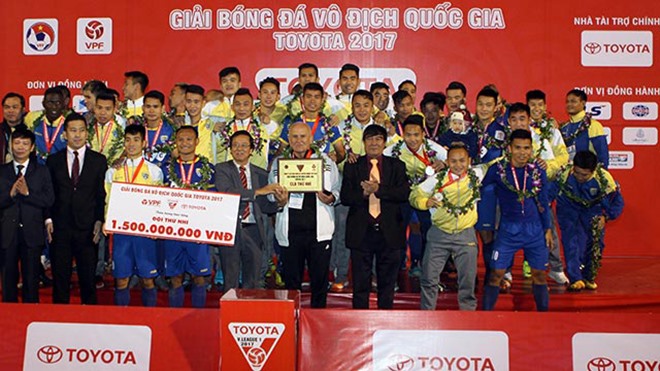 FLC Thanh Hóa coaches and players receive their silver for their second place at the V.League. They will be Vietnamese representative at the AFC Champions League 2018.

The club will replace champions, Quảng Nam FC, who did not qualify for the tournament based on the AFC regulations

Following the competition schedule, Thanh Hóa will meet Eastern SC of Hong Kong on away ground on January 23.

“We are proud to represent Việt Nam at the continental tournament but also worried about it,” said President Doãn Văn Phương.

“The sudden replacement has forced us to change plans for the next season. It brings us many challenges and it is difficult to be fully prepared. However, we will try our best,” he said.

Thanh Hóa are in the process of changing their coaching board and line-up.

Coach Ljupko Petrovic has left and the managers have not found anyone to take his place. Their striker, UcheIheruome, has also said goodbye and some of the key players’ contracts have come to an end.