Friendly tournament or not, losing in a penalty shoot-out is still the cruelest way to lose a final. 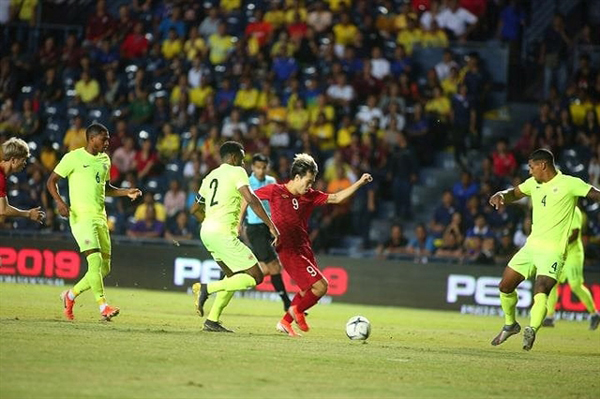 And that’s exactly what happened to Việt Nam who were beaten Saturday night in the King’s Cup to Curacao.

Nguyễn Công Phượng missed the only spot-kick of the shoot-out, handing victory to the Caribbean side.

After 90 minutes in the final, being played at Chang Arena in Buriram, Thailand, the scores were level at one each.

Curacao must have thought they had sealed the deal, leading with just seven minutes to go.

But a strike by Phạm Đức Huy leveled the score and took the match to penalties.

Sadly for Việt Nam, it just wasn’t meant to be.

Semi-final goal scorer Nguyẫn Anh Đức had to make do with a place on the bench as coach Park Hang-seo tinkered with his line-up for the final.

He was replaced by Phuong up front and there was a new midfield duo in the form of Huy and Lương Xuân Trường.

In the opening exchanges it was Việt Nam who started the brighter, winning a number of corners but none materialised into a scoring opportunity.

On 12 minutes, Nguyễn Văn Toàn forced a mistake from the Curacao defence to put Phượng through but the keeper came out to push his effort wide.

Just after the quarter hour mark the Caribbean side managed to get a foothold on the game, forcing to corners in quick succession.

Curacao started to grow stronger as the half wore on but were almost caught out on the counter-attack.

The sprightly Toàn tried to thread the ball through to Phượng after the Vietnamese attackers found themselves two on one, but his pass was poor.

On 29 minutes, Toàn found himself once again in a good position, but dragged his shot wide of the mark.

As the clocked ticked in the first half it was the Caribbean side who finished stronger, but couldn’t manage to break the deadlock.

At the beginning of the second half Toàn again found himself in a good position to break the deadlock, but his effort was weak.

On the hour mark Curacao finally found the back of the net through an unlikely source.

Defender Jurich Carolina struck a beautiful effort from the edge of the box to beat goalkeeper Đặng Văn Lâm.

Undeterred, Việt Nam refused to drop their heads and with seven minutes left on the clock drew level.

A neat pass from the right was dummied on the edge of the box by Nguyễn Quang Hải, allowing Huy to drill the ball into the back of the net.

Penalties followed, but for Việt Nam, and particularly Phượng, it just wasn’t meant to be with the King’s Cup heading 17,000km to the east Caribbean.

It wasn’t all doom and gloom for the Vietnamese though, as the normal time draw should help the country’s FIFA ranking, which is crucial ahead of the World Cup qualifiers later this year.