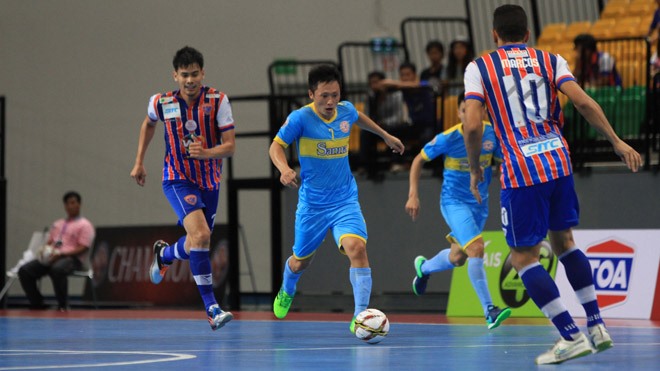 The Vietnamese representative lost 0-4 to defending champions Thai Port FC of the hosts at the Bangkok Arena.

Sanna Khánh Hòa, who were disqualified after the group stage of the tournament two years ago, returned to the regional competition displaying great performance.

They drew the first match 1-1 with Melaka United of Malaysia before storming into the final with three big wins. Sanna Khánh Hòa trounced Laos’ Vientiane Capital 9-2 before winning 6-2 over East Coast Heat of Australia in the group round. In the semi-finals, they defeated Permata Indah of Indonesia 3-0.

Thai Port, regarded as the second-best team in their country behind Chonburi, did even better. They snatched four wins in a row to enter the final.

The hosts exhibited their power from the beginning of the gold-medal match with lots of confidence and were better composed in front of several thousand fans.

Sanna Khánh Hòa, on the other hand, were more defensive and that was all that the Thais needed, as they scored the opener in the third minute. Marcos Mendoca fired in a corner that ricocheted off Nguyễn Quốc Bảo and into the goal.

Two minutes later it was 2-0 when Chaivat Jamgrajang floated in a long ball from his own half, well beyond the reach of Sanna Khánh Hòa keeper Nguyễn Đình Ý Hòa, who was well off his line.

The visitors tried to raise their level after conceding the two goals. Thành Đạt, Khắc Chí and Đình Hùng took shots at Thai Port’s net in turns. However, goalie Watchara Laisri did a good job denying all their attempts.

It became more difficult for Sanna Khánh Hòa when Nguyễn Nhớ received the second yellow card and was sent off. The lack of a player forced Sanna Khánh Hòa to play defensively, which helped them to retain the score line until the end of the first period.

After absorbing much of the pressure, a quick counter in the 33rd minute saw Mendoca nailing Thai Port’s third and his second of the encounter with a sweet left footer.

Six minutes later, Chaivat then finished things off with the fourth goal of the game, latching on to a pass from Anantachai Prabwongsa.

The two sides met each other in the previous edition of the tournament in 2015 when the match ended 1-1.

The Vietnamese created history with the silver of the regional event, while Thai Port set up a hat-trick of titles.

It was Permata Indah who went ahead first in the sixth minute when Khalid El Hattach blasted in a corner that went off Mohd Firdaus Ambiah and into goal.

However, Melaka then fought back two minutes later through Saiful Aula Ahmad to put both teams on level terms at the half.

The second half belonged to Melaka, as they took more control to eventually score three more goals in a two-minute blitz through Muhammad Shamsul Amar Zamri.