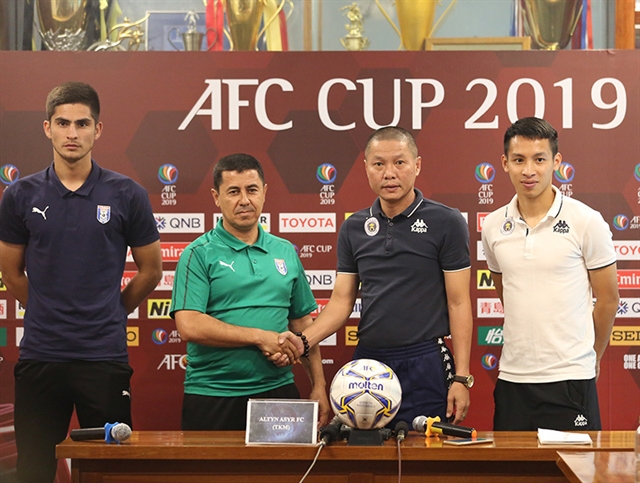 But they will still be doing all they can to become the first Vietnamese side to reach the Inter-Zone Final.

In the past month, key scorer Ganiyu Oseni got injured and will be out for the season after surgery on his leg, defender Đoàn Văn Hậu suffered a knee injury last week and will be out for six weeks, defender Đỗ Duy Mạnh was hospitalised because of high temperature and he has not recovered, captain Nguyễn Văn Quyết and defender Trần Văn Kiên have light pains while midfielders Đậu Văn Toàn and Đinh Tiến Thành both have problems too.

“We have a big problem. We have no midfielder available for this match at all,” said Hà Nội coach Chu Đình Nghiêm at the press briefing on Monday.

“I asked defender Mạnh and he said he would try to play. I have to watch him (until tomorrow) but actually he would be in the first team as I have no one else. (Đinh Tiến) Thành can be his substitute if he could not cover all 90 minutes,” said Nghiêm.

“Altyn Asyr have tall and big players who are really strong. Then we will play short balls and try not to vie against them in term of physique.”

He said Hà Nội want to make history for Việt Nam football. With the current personnel the team must try hard and still go for a win.

On the other side, coach Hojageldiyev Yazguly was confident although he admitted his team lacked information about Hà Nội.

Yazguly said at this round both two sides were really strong and the match would be very attractive.

The 42-year-old also spent time to watch Hà Nội’s matches and has been impressed with captain Quyết. He said Hà Nội were good at home but Altyn Asyr have prepared well for the match and were confident of a positive result to take into the second leg.

Prior to the tournament, Việt Nam champions Hà Nội’s best result was in the knockout stage in 2014 while Turkmenistan league winners Altyn Asyr lost out to Air Force Club of Iraq in the 2018 final.