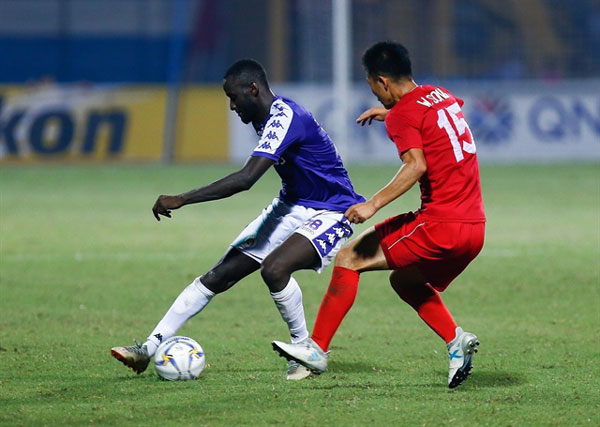 While a draw against a team made up of much of their country’s national side is nothing to be ashamed of, 4.25 SC’s two away goals at Hàng Đẫy Stadium could prove crucial to deciding who moves on to the showpiece final.

The visitors started the brighter and indeed opened the scoring, with a fine passing move in the 19th minute ending with Rim Chol-min poking the ball home past Hà Nội goalkeeper Nguyễn Văn Công, his fourth goal of the continental campaign.

However the lead lasted a mere minute, as Papa Ibou Kebe found himself in space in the box and was able to square for captain Nguyễn Văn Quyết, whose tame finish was spilled by 4.25 SC custodian An Tae-Song into the net.

The V.League 1 champions edged into the lead in the 28th minute, with Kebe turning finisher this time. The French forward latched onto a dinked ball over the top before calmly finishing past the onrushing An.

The home side suffered a blow six minutes later as Công was stretchered off injured, replaced by his understudy Bùi Tiến Dũng.

The home side created more chances in the first period but were unable to extend their lead.

The second half was dominated by the home side as Hà Nội piled the pressure on and looked for a crucial third goal.

They thought they had it in the 57th minute as Pape Omar Faye blasted home, but the referee adjudged him to have handled the ball on the edge of the box.

Just as it seemed Hà Nội would see the game out with a victory, disaster struck.

After Quyết gave the ball away in his own half, 4.25 SC star striker Kim Yu-song fired an unstoppable left-footed drive past Dũng in goal to equalise.

The Vietnamese side threw bodies forward in the final minutes but were unable to find the net again.

The result puts the North Koreans firmly in the driving seat with two away goals to defend in the second leg in Pyongyang in two weeks.