Việt Nam’s U23 team will face Japan in Group D of the men’s football of the Asian Games (ASIAD) 18, following the draw held in Indonesia on Thursday. 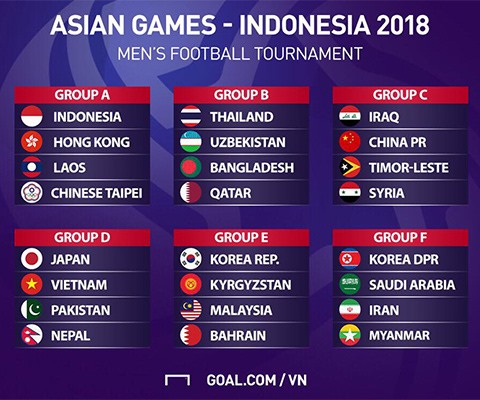 Besides Japan, Việt Nam will compete alongside Pakistan and Nepal.

In Group B, Thailand will meet Qatar and Uzbekistan, while Malaysia will compete with South Korea and Bahrain in Group E.

The men’s football is to set kick off on August 14 and finish on September 1 in Indonesia. The official schedule will be announced in the next few days.

At the ASIAD 2014 held in Incheon, Việt Nam under the guidance of Japanese coach Toshiya Miura, progressed from the qualifying round before losing to the United Arab Emirates in the quarter-finals.

Việt Nam will convene on July 22 to prepare for the event. They will train at the PVF Centre in Hà Nội and play three friendly matches to hone their skills.

They will meet Barcelona B, U23 Oman and U23 Uzbekistan in early August at Mỹ Đình National Stadium.

In other news, Việt Nam women’s national football team have been drawn in Group C along with Japan and Thailand. While Indonesia, South Korea, Chinese Taipei and Maldives are in Group A. Group B consists of North Korea, China, Hong Kong and Tajikistan.