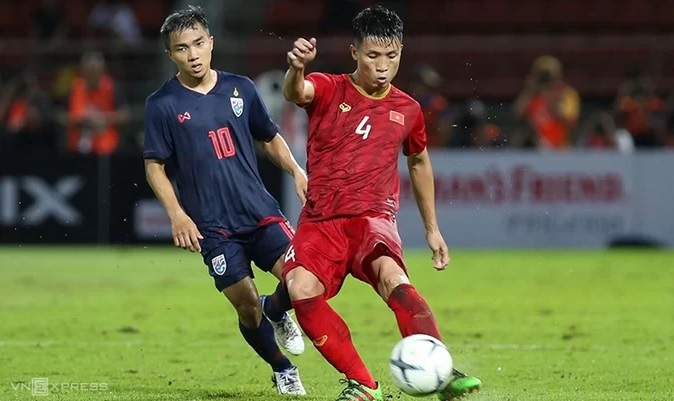 Thailand dominated possession during the majority of the match but could not convert it into a goal.

Despite a slow start, Vietnam came back strongly in the second half and fought bravely to keep a clean sheet until the final whistle.

The goalless away draw could be considered a success for Park Hang-seo’s side. The Golden Dragons will have the upper hand, in terms of psychology, as they host the War Elephants at My Dinh Stadium in Hanoi on November 19.

Inspired by their 1-0 victory against Thailand in the 2019 King’s Cup, Vietnamese players started the match confidently, and came close to opening the scoring in the very first minute of play, but striker Van Toan placed a shot narrowly wide.

Thailand deployed three players in the attacking line, including Supachok, Thitipan and Chanathip, without a real striker.

With better physical strength and individual skills, Thailand controlled the ball better in the following minutes of the first half, but the lack of a real striker, possibly Supachai Jaided, made their attacks not sharp enough to be successfully converted.

Thitipan met a right-wing cross with a header off the post in the 20th minute before Supachok placed a shot wide 22 minutes later. 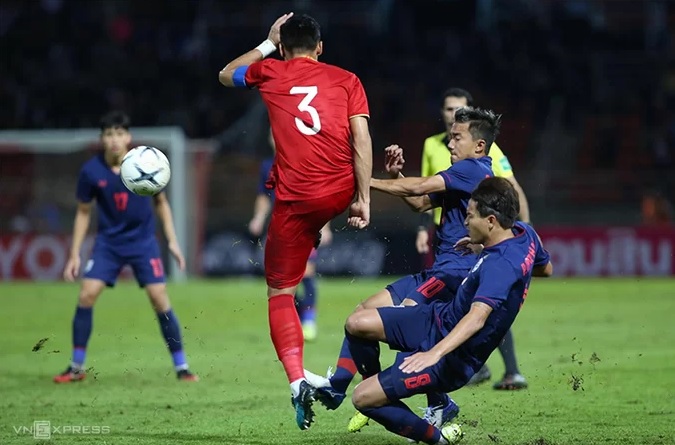 Thailand control the ball better but fail to turn their possession into a goal. (Photo: Vnexpress)

The strategic substitution enabled Vietnam to diversify their attacks; however, Cong Phuong missed some good openings for the away side.

The appearance of defender Van Hau on the field from the 74th minute helped the Golden Dragons solidify their back line and made it difficult for the Thai side to approach keeper Dang Van Lam’s goal.

Striker Van Toan missed a good chance to break the deadlock for Vietnam eight minutes from over-time, shooting the ball high after a clever through ball from teammate Quang Hai.

The Golden Dragons almost nearly conceded a goal in the last minute of stoppage time, as Supachok dribbled the ball past Vietnam keeper Dang Van Lam, but the goalie then brilliantly parried the Thai midfielder’s shot immediately later to rescue the Vietnamese side.

By keeping a clean sheet away, Vietnam will hold the upper hand into the second leg against the Thais at My Dinh Stadium on November 19.

Next up for Park’s troops will be a home clash against Malaysia on October 10.