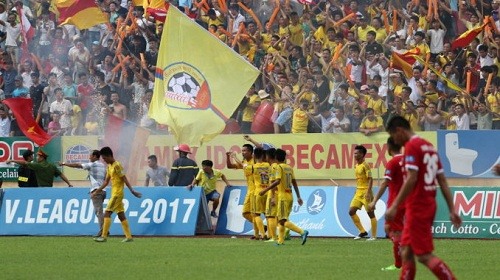 Nam Định players celebrate their promotion to the V.League. Nam Định will defend their title at the China-ASEAN Cities Invitational, in Nanning later this month.

Nam Định just won a berth to compete at the national premier league, V.League, next season.

Quảng Ninh Coal are currently No 4 in the V.League. They maintain hopes of winning the trophy for the first time this year.

They will play against two other teams, Guangzhou Evergrande Taobao, who are the Chinese Super League’s defending champions, and Pattaya United, who are playing at Thailand’s Thai League 1.

It is the second time in a row that Nam Đinh are taking part in the competition. Last year, the team, who played at the First Division tournament of Việt Nam, beat three other rivals to take the winning trophy.

Four teams will play in two pairs. The winners will advance to the final match, while the losers will vie for the bronze medal.

Nam Định, however, may meet with difficulty to defend their title as Guangzhou Evergrande Taobao are a powerful club who are under well-known Brazilian coach, Felipe Scolari. Guangzhou won the league three times and brought home the AFC Champions League in 2015.

Nam Định will play Guangzhou in the first match on November 29. Quảng Ninh will see Pattaya United later in the day.

The final and third-place play-offs will be on December 2.