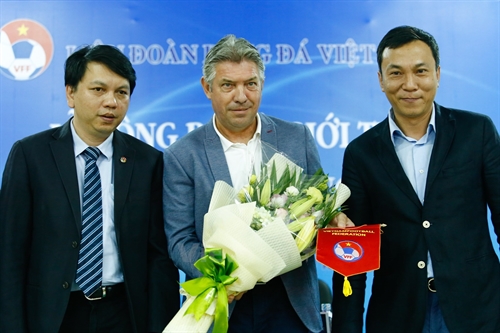 Gede will work in Việt Nam for 24 months starting from August 1 and has been tasked with raising the quality of the country’s football scene as well as setting a development plan for the future.

“The executive director will help national football, especially the youth, to run on the right track which suits the international trend,” VFF General Secretary Lê Hoài Anh said at a press briefing in Hà Nội yesterday.

“Gede is an expert with a UEFA certificate, who has worked in different countries in Asia. He will advise us on how to raise the quality of national football, focussing on the youth who will be our future,” he added.

“He will implement plans that will help the men’s, U-23 and the women’s squads meet continental standards and gain access to the global game. Gede will support clubs in training systems, coach their trainers and accomplish some other tasks based on the agreement between the two sides,” Anh said.

The German expert was excited to work in a new environment, although he said he needed time to adjust to the change.

“It is my first time here but I see excellent conditions (provided by the VFF). I am interested in helping the federation, players and everyone. I will give my experience and support everything to improve national football, especially the youth,” Gede said.

“You know football is not easy, so I need time to learn all about the training and competition system here. I will check teams and talk with coaches to get to know each other and try our best for a good result. It is time to work.”

Gede, 60, will return to his hometown before he takes up his new assignment. His first obligation will be to work with the U-19 side which will compete in the Asian championship this October, he said.

Gede originally applied to become coach of the national team in 2011 but was upstaged by his fellow countryman Falko Goetz, who was later dismissed because due to poor performance at the 26th Southeast Asian Games in the same year.

Gede is the second expert to come to Việt Nam as executive director.

Ten years ago, Rainer Wilfeld, also from Germany, arrived but left soon after having failed to come to a consensus with the VFF.

Gede entered football at the Schalke 04 training centre in 1970. He became a player at the club from 1975 to 1977 before moving to Preussen Munster and Fortuna Cologne.

Gede switched to working as a trainer of Fortuna Cologne in 1991 and travelled around with different European and Asian clubs before being selected as coach of the Iranian Olympic team in 1995.

He was executive director of the Iranian squad which won the Asian championship two years later.

Since then he has worked in Uzbekistan, Bahrain, Malaysia, and Libya, in addition to Azerbaijan.

Before arriving in Việt Nam he was at the Aluminium Hormozgan Club in Iran.