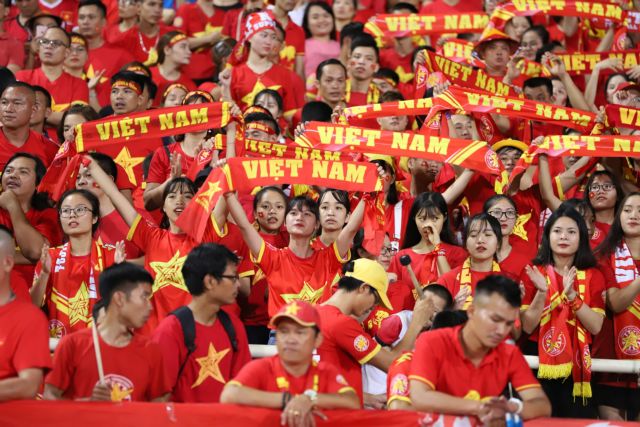 Much had been made before the match of the improvements by Malaysia since the teams last met in the final of the AFF Cup last December, when Việt Nam were victorious. But with a passionate home support behind them, Hải’s goal was enough to seal the victory.

The visitors will be disappointed they didn’t offer more in attack during the 90 minutes in a match the home side dominated.

Nguyễn Văn Toàn showed his skills with a neat dribble into the box but his effort was blocked by the Malaysian defence.

Four minutes later the visitors had a chance to take the lead. A mix-up in front of Đặng Văn Lâm’s goal should have seen Malaysia open the scoring, but they failed to seize the opportunity.

Early in the first half centre half Shahrul Saad committed a needless foul and was rightly shown the yellow card, leaving him walking a tight-rope for the rest of the match.

Hà Nội FC’s Hải stepped up to take the free-kick, but the resulting headed effort was tame, and fell straight into the arms of Farizal Marlias in Malaysia’s goal.

On 22 minutes a neat through ball by Nguyễn Trọng Hoàng, but Nguyễn Công Phượng had strayed offside much to the disappointment of the home supporters.

Five minutes later Việt Nam had the ball in the back of the net, only to be denied once more by the assistant referee’s flag.

Free kick specialist Hải had a chance to take the lead with an edge of the box effort but he shot wide of the target.

But five minutes before the stroke of half-time Hải made amends. He latched onto a long pass from captain Quế Ngọc Hải to volley on the turn into the back of the net giving Marlias no chance.

After the break Nguyễn Tuấn Anh was replaced by Phạm Đức Huy and on 49 minutes striker Nguyễn Văn Toàn had a great chance to put the home side two up, but his effort was saved.

With a passionate home support behind them, Việt Nam did all the pressing as the clock ticked but failed to add to their tally.

Disappointed with his team’s result, coach Tan Cheng Hoe of Malaysia didn’t attend the press conference after the match.

“We had first chances and played well but we didn’t take full advantage. Malaysian defence made errors. The match was very nervous so we didn’t change our footballers much.”

“We are too surprised with the way of playing of Việt Nam,” the assistant added.

Việt Nam’s head coach Park Hang-seo said that it was a worthy win for Việt Nam.

“I thank my players today very much,” said the South Korean. “They tried their best. I am proud to lead Vietnamese team.”

This was Việt Nam’s first home win in the World Cup qualifiers after their earlier draw with Thailand. Việt Nam will next meet Indonesia next Tuesday while Malaysia will take won Thailand on November 14.