Hà Đức Chinh helped Việt Nam secure a 1-1 draw with the UAE in a friendly on Sunday at HCM City’s Thống Nhất Stadium. 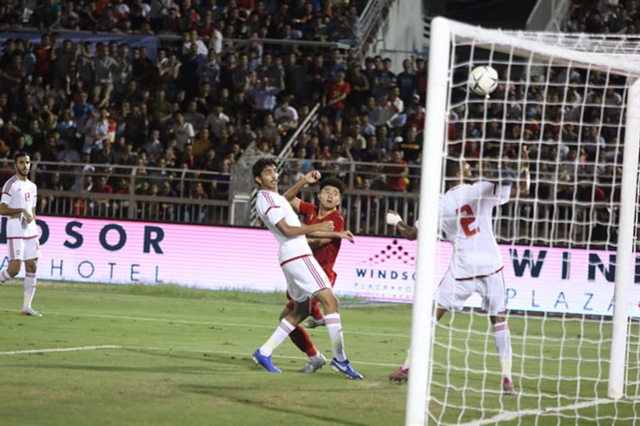 Both teams started with attacking intent but it was the visitors who took control of the game, despite failing to break down a solid Vietnamese defence during the first half.

The first chance actually fell to the home side after five minutes, but midfielder Huỳnh Tấn Sinh had his header saved by Mubarak Al Ameri in the UAE goal.

Trương Văn Thái Quý, Triệu Việt Hưng and Hà Đức Chinh all tested Al Ameri, but he remained up to the task.

The UAE looked dangerous through Alkhabeel Almehrzi and Yahya Ali Said Alghassani, but they both failed to hit the target having found good positions.

Striker Chinh showed why he was not selected for the national team’s World Cup qualifiers by missing at least three chances for Việt Nam in the first half.

Just five minutes after the break, the UAE opened the scoring after a mistake by the hosts.

Defender Lê Ngọc Bảo lost the ball in front of his penalty area and despite Nguyễn Đức Chiến’s efforts to clear the situation it fell to Salem Al Zaabi whose finish was too strong for keeper Bùi Tiến Dũng.

Two minutes later it was Chinh who managed to make amends with the equaliser.

Nguyễn Hoàng Đức floated the ball into the box and Almehrzi misjudged its flight allowing Chinh to nod into the empty net.

Both teams made eight substitutions as friendly games allow, but that led to a disjointed game.

The hosts were unable to create any real threat, and the UAE could have nicked near the death with a shot that hit the right hand post from Ali Ismail Alijunaibi after he’d torn apart the Vietnamese defence in the 86th minute.

The friendly was part of the teams’ preparations for the Asian U23 Championship which will be held in Thailand next January.

The two sides will meet each other again there in the group stages, where they have been drawn in Group D with North Korea and Jordan.