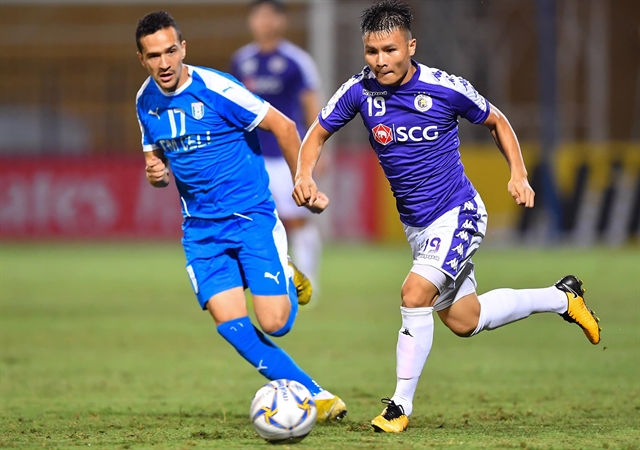 The game was held at the Hàng Đẫy Stadium in Hà Nội.

The Vietnamese side won the game thanks to two goals from star midfielder Nguyễn Quang Hải and a penalty in the dying minutes scored by striker Nguyễn Văn Quyết.

With the advantage of playing at the home, the capital team looked dangerous from the get-go.

However, it was the visiting side which scored the opener just four minutes in. Taking full advantage of an error by defender Phạm Đức Huy, Murak Yakshiyev defeated goalkeeper Nguyễn Văn Công with a low shot from the top of the box.

The hosts remained calm after conceding early, continuing to look for counterattacking opportunities.

Latching onto a pass from the left wing, midfielder Pape Omar Faye headed an effort that beat the keeper but hit the crossbar. Unbelievably, Papa Ibou Kebe pounced on the rebound but saw his shot rattle the crossbar too.

The defending V.League champions continued to dominate the game but struggled to find an equaliser.

Just when it looked like they may trail going into the break, Hải delivered for his team in the 41st minute with a perfect free kick from the top of the penalty area that bent around the wall before finding the back of the net.

After the break, both sides pushed hard to find another goal.

Altyn Asyr’s goalkeeper Orazmuhamedov Mamed came under increasing pressure from the hosts, but managed to keep his team in the game.

Hà Nội’s efforts paid off with another goal from Hải in the 61st minute. The Hanoian danced into the box from the right-hand side, evading three defenders before sending a fierce shot into the far side of the goal.

Lương soon found an opportunity but his long shot hit the side netting.

As Hà Nội piled on the pressure late in the match, goalkeeper Mamed fouled Đỗ Hùng Dũng in the box to give Việt Nam a penalty in the 85th minute.

Striker Nguyễn Văn Quyết stepped up and confidently sent his shot into the upper left corner, sending the crowd at Hàng Đẫy into a frenzy.

Hà Nội will take its 3-2 lead over Altyn Asyr into the second leg of the tie in Turkmenistan on August 27.