Việt Nam’s campaign at the Asian Football Confederation U20 Futsal Championship came to a halt after it lost 1-3 to Japan on Saturday. 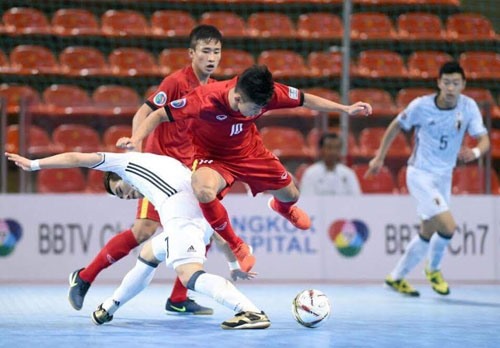 Việt Nam (in red) are out of the Asian U20 Futsal Championship after losing 1-3 to Japan.

Both the teams headed into the game needing a win to secure their progress in the tournament. With both sides going all out to attack each other, the Vietnamese squad was unable to resist Japan’s powerful attempts.

Within the first six minutes, Kazuya Shimizu’s strike was converted into the opening goal. Tageshi Higuchi then doubled his side’s advantage going into the break.

Mitsuru Nakamura then pounced to make it 3-1 within seconds after resuming, as Japan, despite Dương Ngọc Linh’s consolation for Việt Nam, secured their progress into the next round, ahead of the United Arab Emirates.

Japan finished second in Group B behind Indonesia.

Japan will now meet Group A winners Iraq in the knockout phase, while Indonesia face a last eight encounter with host nation Thailand.