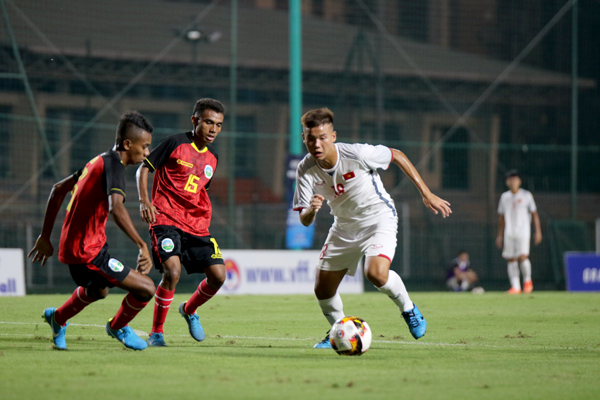 At the recent 2019 AFF U15 Championship in Thailand, Vietnam clinched a hard-fought victory against their opponents Timor Leste. However, in their Saturday meeting, Timor Leste lacked key pillar Paulo Domingos Gali Da Costa Freitas due to over-age, thus losing an element that could produce surprise.

Kim Shiinhwan’s side were completely overwhelmed by Vietnam’s constant attacks and pressure throughout the match.

Vietnam needed only six minutes to take the lead, with Nguyen Van Duong intercepting Vo Anh Quan’s left-win cross and shooting past the Timor keeper to open the scoring.

Seizing the better of the game, it was not surprising as Dinh The Nam’s troops doubled their advantage in the 27th minute. Vo Anh Quan remained the “detonator” dribbling past a Timor defender before assisting Pham Van Phong to comfortably slot it in from close range.

After the break, Timor Leste intensified their attacks seeking to narrow the gap. However, they failed to get a goal back as Vietnam remained the better side.

A bunch of opportunities were created by the Vietnamese players, but none of them were successfully converted, making the 2-0 score unchanged until the final whistle. 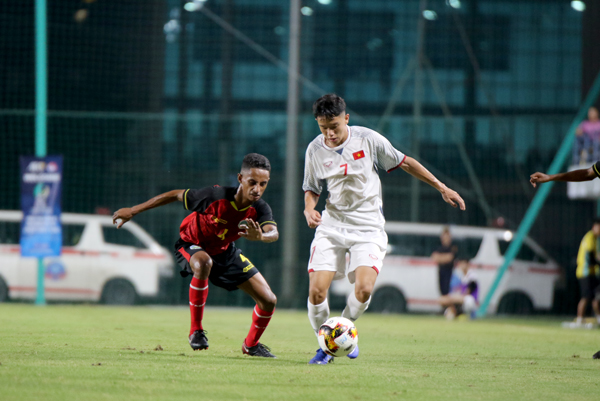 The convincing victory has put Vietnam provisionally on top of Group H, above Mongolia on goal difference.

In another fixture on the same day, higher-rated Mongolia had to resort to a second-half strike by Munkhbolor Jargalsaikhan to overcome Macau (China) for an opening victory in the tournament.

Next up for Vietnam U16s will be a clash against Mongolia U16s on September 18.

The 2020 AFC U16 Championship qualifiers feature 47 teams in three groups of five and eight groups of four teams. Vietnam have been placed in Group H, together with Mongolia, Australia, Macau (China) and Timor Leste.