SHB Đà Nẵng defeated Sanna Khánh Hòa BVN 2-1 in the V.League 1 on Sunday thanks to a late winner. 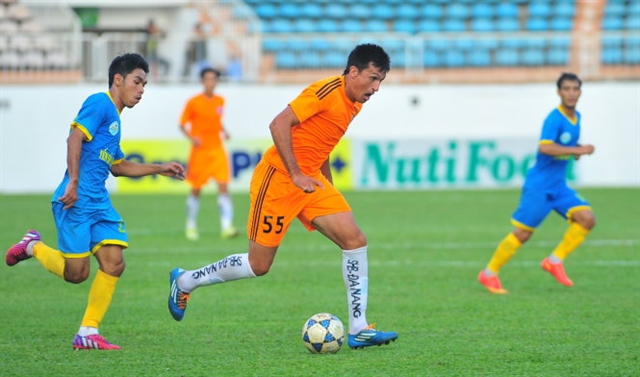 The game was held at Hòa Xuân Stadium in the central city of Đà Nẵng.

The hosts started the brighter and it only took five minutes for Đỗ Merlo to rattle the woodwork from long range, with goalkeeper Tuấn Mạnh beaten all ends up.

The Argentine-Vietnamese striker had several more chances to open the scoring, but the teams went into the break goalless.

Merlo continued his own personal duel with the frame of the goal in the second half and was unlucky to see an excellent lobbed effort come off the bar in the 63rd minute.

A mere minute later the home side did get the breakthrough they deserved, as midfielder Đặng Anh Tuấn skipped past Khánh Hòa’s defenders and slotted home to make it 1-0.

The away side seemed destined to grab a point after they were awarded an 82nd minute penalty which Brazilian forward Warley Nascimento de Oliveira duly dispatched.

However there was to be another twist, as Đà Nẵng won a spot-kick themselves in the second minute of extra time.

Merlo stepped up and there was to be no mistake this time, sending the home fans happy and with all three points.

With this victory, Đà Nẵng now stand seventh in the table, while Khánh Hòa fell to 14th.

In another match, Sông Lam Nghệ An draw 0-0 with Hải Phòng FC.