Vietnam have been drawn in Group A, together with Malaysia, Myanmar, Cambodia, and Laos, at the upcoming AFF Suzuki Cup 2018, which is scheduled to take… 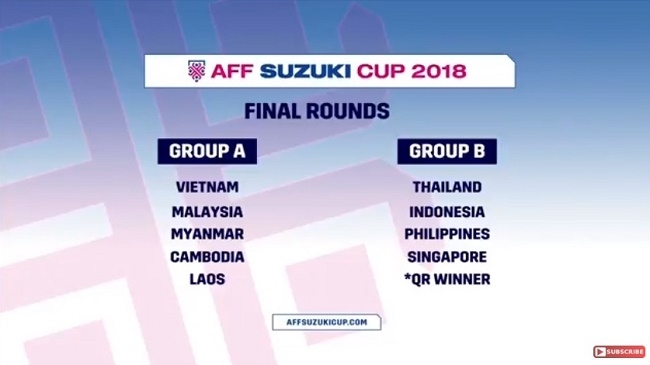 The team grouping for the 12th edition of the AFF championship was conducted in Jakarta, Indonesia on the afternoon of May 2.

Malaysia are considered the toughest challengers for Vietnam in the group stage of the competition. At the 2014 tournament, Malaysia lost 1-2 in the first leg of the semis, but fought back to beat the Vietnamese team, coached by Japanese Toshiya Miura, 4-2 in the return leg to seal an aggregate 5-4 victory.

However, at the previous AFF Suzuki Cup two years ago when the two teams were also drawn in the same group, Vietnam, coached by Nguyen Huu Thang, edged out Malaysia 1-0 thanks to Nguyen Trong Hoang’s solitary goal en route to the semifinals.

Vietnam will begin their 2018 campaign with a match against Laos on November 8, before taking on Malaysia, Myanmar, and Cambodia on November 16, 20, and 24, respectively. This year, the Vietnam Football Federation (VFF) has assigned head coach Park Hang-seo and his players the goal of progressing to the final.

Group B is considered a group of death, with the presence of reigning and five-time champions Thailand, defending runners-up Indonesia, the Philippines, the four-time champions Singapore, and the winner of a play-off between Timor Leste and Brunei.

The participants will battle it out in a round robin format to decide the top two teams from each group that will play in the semifinal stage.