In the afternoon of Feb 10, in Hanoi, Vietnam’s Prime Minister had a meeting to congratulate and commend the Vietnam women’s national football team, the “diamond girls” who have just made excellent achievements for the first time to attend the 2023 Women’s World Cup. 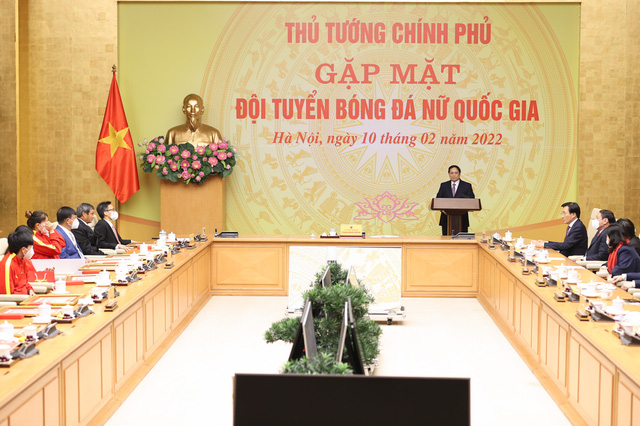 In commending the excellent achievements of the women’s team, Prime Minister Pham Minh Chinh said: “Yesterday, President Nguyen Xuan Phuc met with the men’s football team, praised and recognized the high achievements of the two teams. Today, on behalf of the leaders of the Party and Government, I sincerely thank and send my warmest congratulations, warmly commend the National Women’s Football Team under the guidance of head coach Mai Duc Chung and coaching assistants.

Being here today, not only the football team but also many agencies, ministries, branches, some businesses, and the interest of the whole society, I want us to observe the reality, understand and share the difficulties and struggles of the Women’s Football Team to have immediate and long-term solutions for the development of women’s football in particular and competitive sports in general. We need a solution to ensure that behind the outstanding achievements, the lives of athletes are guaranteed, especially after retirement.” 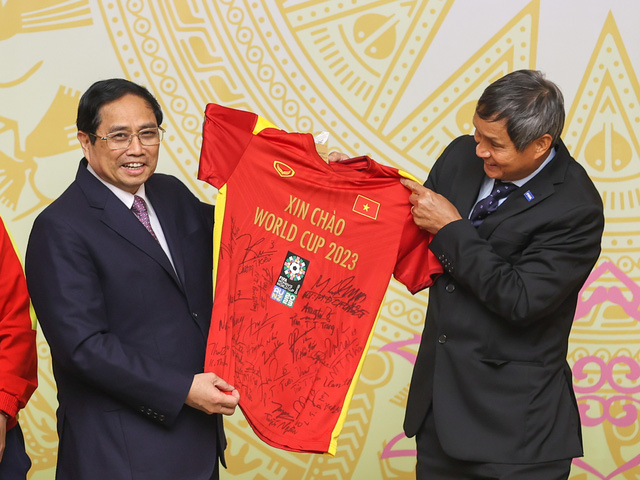 Prime Minister Pham Minh Chinh added: “In recent days, society has given great affection and spread about the achievements of the Vietnamese women’s football team. It is sympathy, sharing, admiration, and belief for the team. These are the incomparable spiritual values that fans have for our “diamond coach” and “diamond girls”.

General Secretary Nguyen Phu Trong, the highest leader of our Party and State, is also very concerned, proud, and happy with our results. This also shows the Party and State’s interest in sports in general and women’s football in particular.

I share these things to convey the message: We need to pay more attention to women’s football. And today, I am very happy to directly listen to the sharing, suggestions, and recommendations of the head coach, the players, the authorities, and businesses. Regarding this, I suggest: The relevant authorities, including the direct management role of the Ministry of Culture, Sports and Tourism continue to review, develop and perfect appropriate policies, synchronously to discover, foster, facilitate and support the development of football in general and women’s football in particular.

Promulgate policies for sustainable development, promote movement football, school football, and strength training of young talents at clubs and localities. And I also want to emphasize, the Ministry needs to coordinate with the Ministry of Labour, Invalids, and Social Affairs to research and propose common policies to develop and care for athletes in competitive sports that are not competitive. top sports to ensure training conditions, remuneration, and employment with athletes, especially after retirement.

The Ministry of Finance will study whether to establish a Women’s Football Development Fund with a transparent operating mechanism, following the law, and issue mechanisms and policies to create financial resources for the development of women’s football.

The Vietnam Football Federation continues to promote the role in perfecting the system of regulations, regulations, and development orientations for women’s football for clubs and localities; closely coordinate with state management agencies in charge of physical training and sports, ministries, branches, localities, agencies and organizations in the course of operation.

For the fans, I am also a passionate football fan, I hope that we all continue to give the team love and affection in all circumstances. The victory of the women’s soccer team has profound meaning. The victory of unity and faith. The victory of bravery and will. The victory of the spirit of “Nothing is difficult – Only fear of not being strong”. Overcoming difficulties, adversity – Conquering yourself. Victory has the value of inspiring and spreading good things in society.”

Prime Minister Pham Minh Chinh hopes that the team, with the spirit of winning themselves, always maintains a high determination to achieve the highest results in the next tournaments, in the immediate future, successfully defend the title at SEA Games 31 next May. Do not rest on the laurels, continue to practice, promote and further demonstrate the talents, intelligence, qualities, will, and bravery of the Vietnamese people. 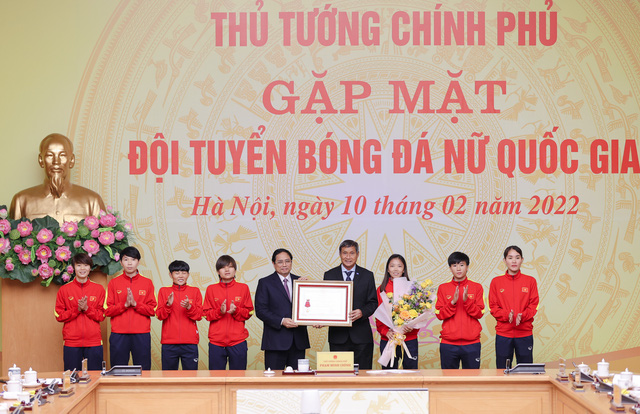 At the meeting, on behalf of Party and Government leaders, Prime Minister Pham Minh Chinh presented the National Women’s Soccer Team and head coach Mai Duc Chung with the First Class Labor Medal from the President. 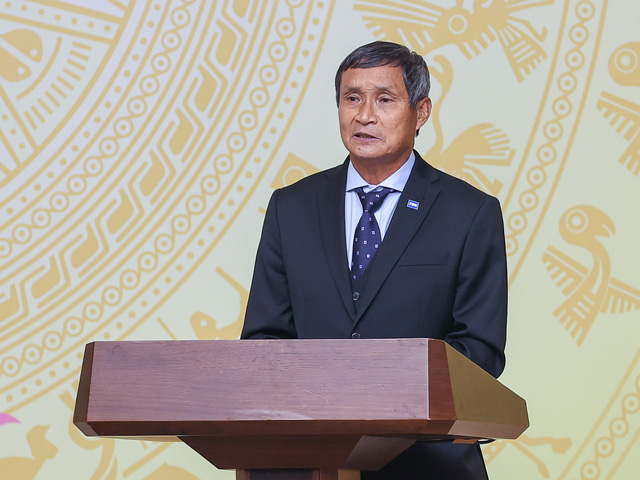 On behalf of the team, head coach Mai Duc Chung promised the Prime Minister that he would continue to work with his team and achieve more achievements to meet the expectations of the Party, Government, and people. . Captain Huynh Nhu also affirmed the determination to maintain the spirit of Vietnamese women in training and competition to try to bring glorious achievements to Vietnam. 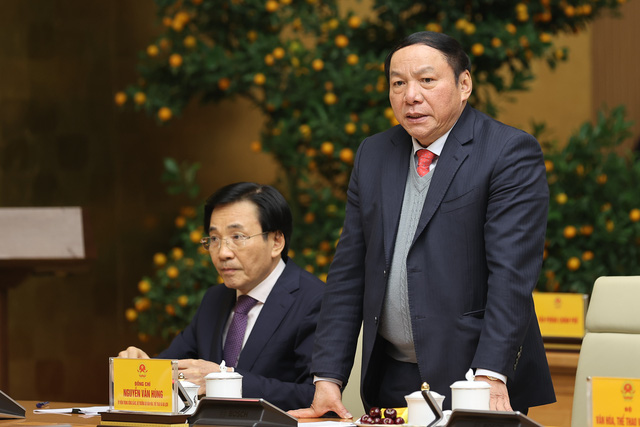 For his part, speaking at the meeting with the women’s team, Minister of Culture, Sports and Tourism Nguyen Van Hung said: “In the past year, the country’s sports have received special attention from the Party and Government and Vietnamese sports have won many outstanding achievements in the international and regional arenas. Especially in this new term, the Prime Minister has paid much attention to Vietnamese sports. The Prime Minister directed the Ministry of Culture, Sports, and Tourism to urgently complete the Vietnam Sports Strategy for the period 2026-2030, with a vision to 2045. Understanding this content, the Ministry of Culture, Sports, and Tourism has coordinated with other ministries and sectors to implement it.

On behalf of the Ministry of Culture, Sports, and Tourism and athletes, Minister Nguyen Van Hung promised to direct the leaders of the sports industry to make more efforts and be more determined to make the country’s sports win more victories. 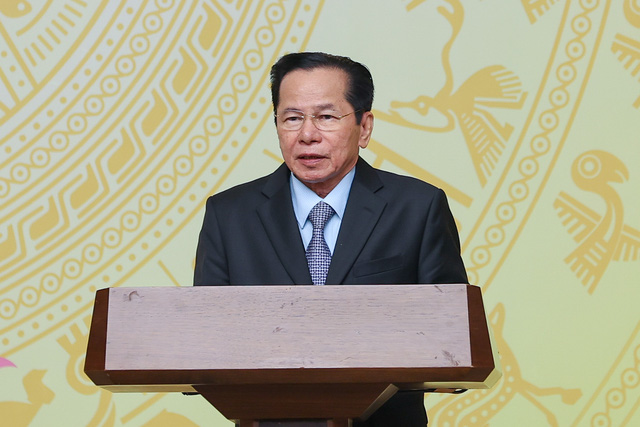